During the first six months of 2020, 175 new federal securities class action cases were filed, which is more than 15% lower than in the first half of each of the last three years. If these filing levels are indicative of the filing pattern for the remainder of the year, annual filings for 2020 will be 350, which is more than 10% lower than the number of cases filed each year between 2017 and 2019. Assuming the filing levels and composition observed in the first half of the year continue in the second half, we may see a decline in new cases filed across all types of cases—a reduction in standard cases (Rule 10b-5, Section 11, and/or Section 12), merger objections, and other types of securities class actions. However, at this pace, the mix of cases will remain consistent with the mix observed in 2019, with fewer merger objections filed than standard cases. 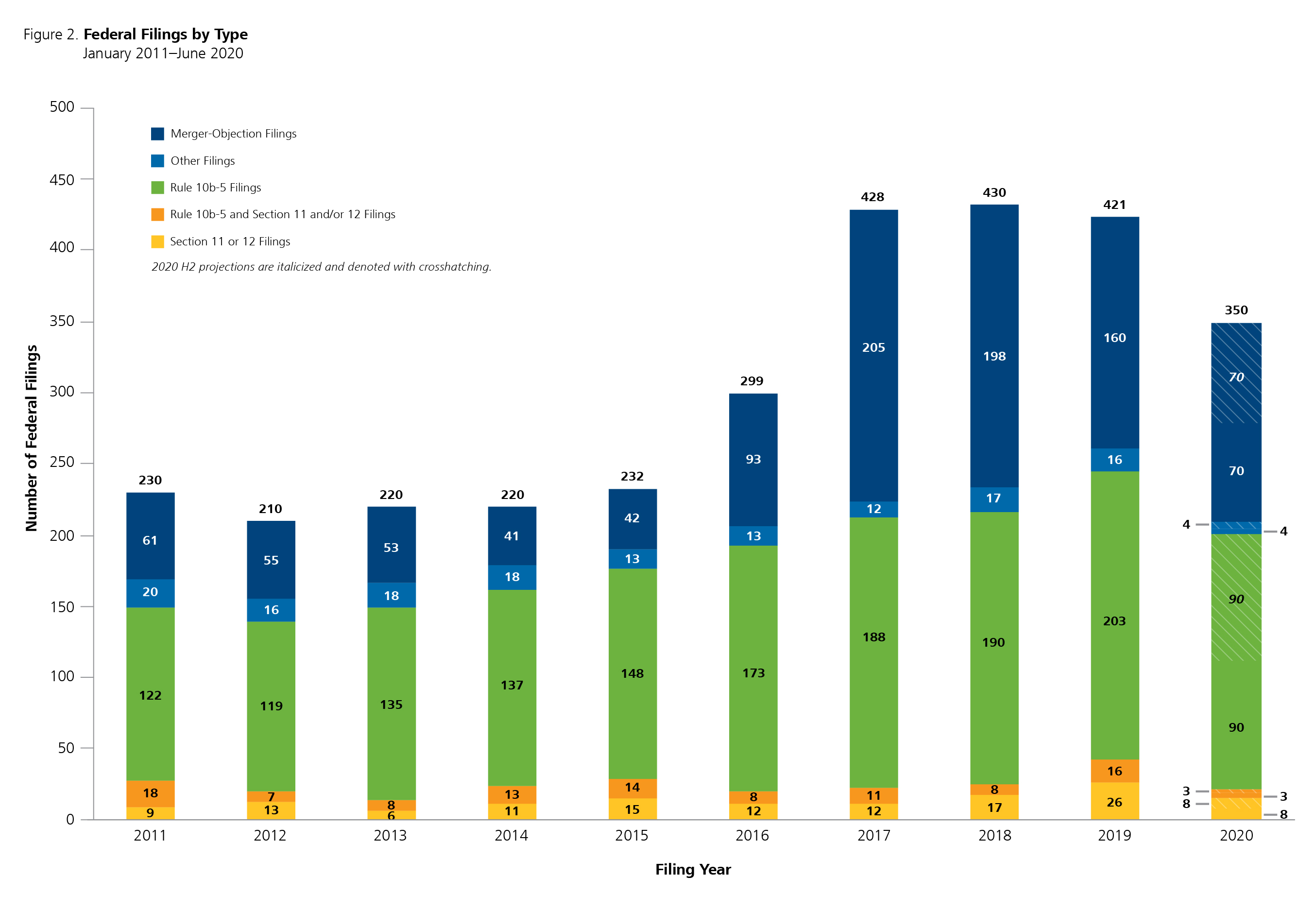 Filings of non-merger objections across economic sectors during the first six months suggest a continuation of a shift in the defendants facing securities class actions. For cases filed between January and June, the Electronic Technology and Technology Services sector accounted for 23% of new filings, the largest proportion of any sector. If H1 2020 filings are indicative of H2 2020 activity, 2020 will be the first year in the last five that the Health Technology and Services sector was not the single most targeted sector. Between March and June of 2020, there were 11 COVID-19-related securities class action suits filed, with all but one case including allegations of 10b-5 violations. Approximately half of these cases were filed against defendants in the Health Technology and Services and Electronic Technology and Technology Services sectors. 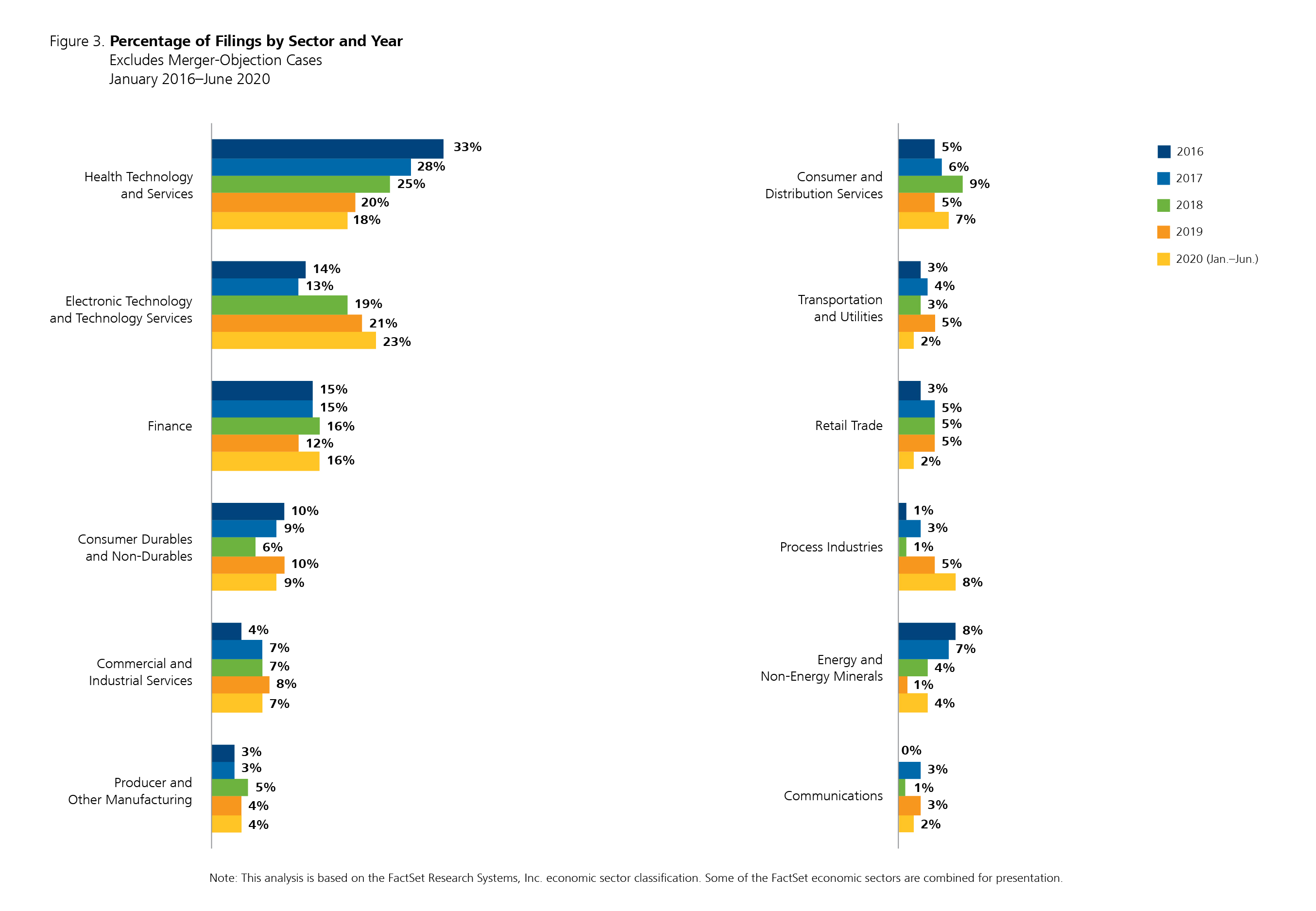 If the aggregate NERA-defined investor losses associated with new cases filed in the first six months of 2020 reflect the size of new cases filed for the remainder of the year, annual losses for 2020 may be in line or slightly below the levels observed in 2019.

The resolution activity thus far in 2020 indicates a shift in the mix of resolved cases, with a higher proportion of cases dismissed and a lower proportion of cases settled than in the most recent years. At this rate, the 2020 annual number of cases settled will be 72, which is a new record low for the 2011–2020 period. Similarly, if dismissed cases continue to resolve at the rate observed in the first half of the year, there may be 270 cases dismissed in 2020, which is the highest recorded level in the 10-year period ending in 2020. In aggregate, if resolutions continue at this pace, resolved cases for 2020 will be higher than in 2019 but in line with the levels for 2017 and 2018. 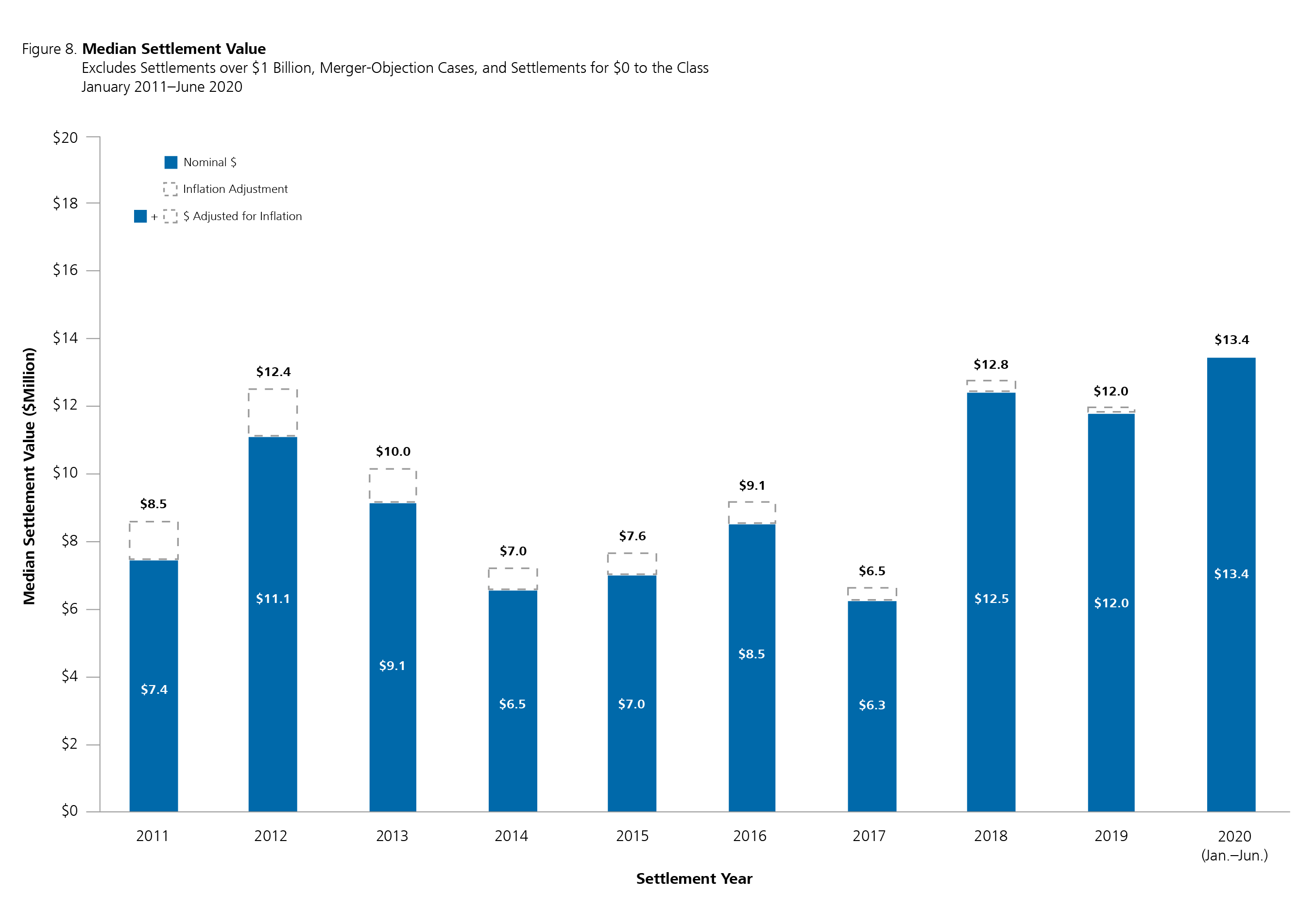