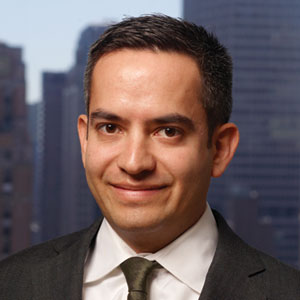 Mr. Baez is an Associate Director at NERA specializing in providing economic expert advice in the areas of financial economics, valuation, and securities and commercial litigation. Mr. Baez’s testimony and advisory work has involved the analysis of equity, bond, option, swap, and futures trading, as well as issues relating to hedge funds, mutual funds, and pension funds. He has analyzed issues relevant to class certification, materiality, loss causation, and damages in dozens of securities and ERISA class actions, and estimated damages and lost profits in merger, bankruptcy, and breach of contract cases.

His work has focused on industries such as banking, health care, telecommunications, information technology, oil and gas, and real estate. Mr. Baez has testified at trial in Federal District Court, and in Spanish and Swiss courts, and has presented before government regulators in the United States and Mexico.

Mr. Baez also manages projects in the economics of product liability and antitrust. He has estimated the number and value of claims likely to arise from allegedly defective or harmful products, including asbestos, talc, consumer goods, and medical products. He has analyzed economic issues arising from regulatory antitrust and competition investigations, including market definition, market dynamics, competition, and pricing.

Prior to joining NERA, Mr. Baez worked as a Consultant in BearingPoint’s Strategy and Transformation Group within the Management Consulting Practice.

Mr. Baez is from Quito, Ecuador, and is fluent in English and Spanish. He received his MBA from Yale University, where he specialized in finance, statistics, and strategy. He received his BA in economics and physics from Vassar College.